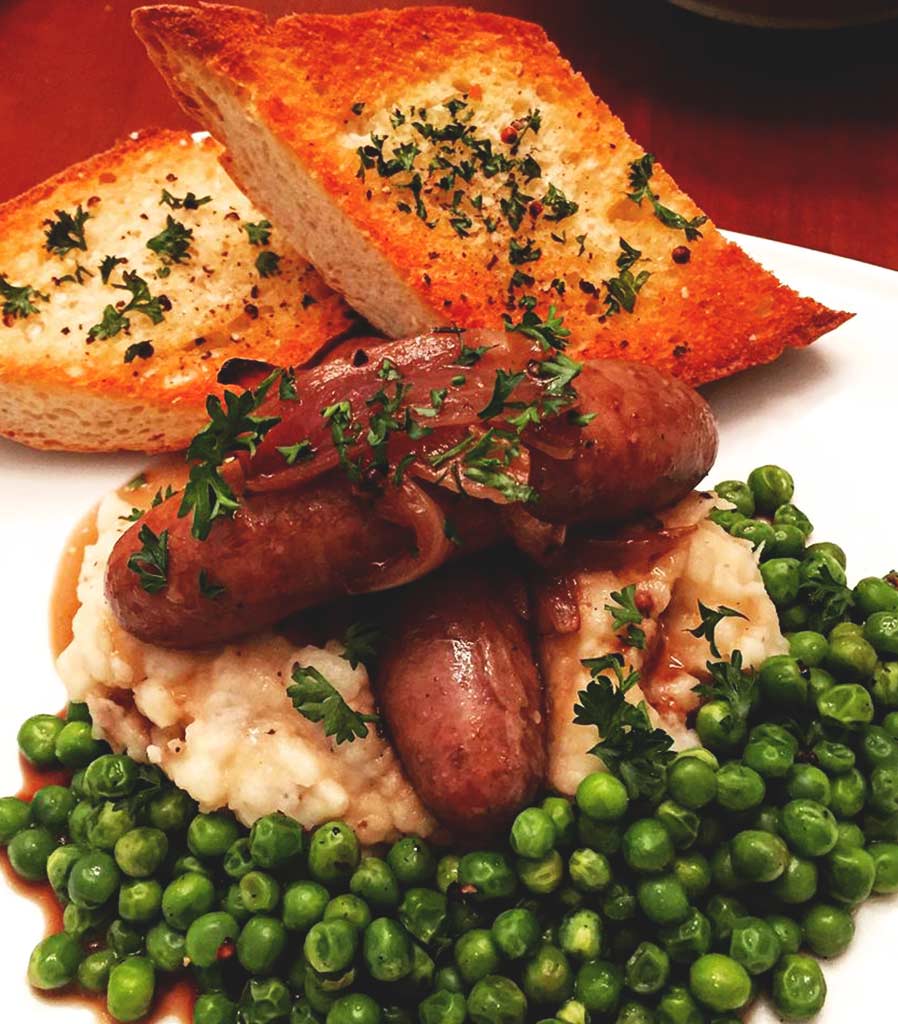 Few things in life are more magical than caramelized onions, garlic mashed potatoes, and sausage. Unless you put them all together in the same meal, and then it’s majestic AF. This dish is one of my favorite comfort meals, and it’s perfect for sharing with friends and family. I always make it in larger quantities because it makes fabulous leftovers as well. And to be honest, I could really eat this meal every single day and not feel even a little guilty about it.

Let’s talk about bangers for a minute. Bangers originated during WWI in the early 20th century.  There was a severe meat shortage during this time, so butchers were using grains as fillers to stretch the meat further. Because of the high amount of water in these fillers, the sausages would pop and spit loudly as they cooked in hot oil, thus given the name: bangers.

For this meal, I subbed bratwurst for the bangers, since they’re a bit difficult to come by where we live. I’m also using an extra-dark stout for the added flavor, but you can use any stout you like to drink.

In a large roasting pan over med-high heat, melt the butter and brown the sausages on all sides with a little splash of the stout beer to help caramelize. Remove the sausages and set aside  for the next step.

In the same pan, with heat reduced to medium-low, melt two tablespoons of butter, and cook onions. Sprinkle with a bit of salt to help them cook down, about 10 minutes. Once the onions are transparent,  sprinkle with the flour and stir to coat evenly. Then add the rest of the bottle of stout, beef broth, and some salt and pepper.  Simmer for about 10 minutes.  Meanwhile, preheat oven to 425º with rack in the middle of the oven. Add sausages to onions and braise until sausages are done all the way through. About another 10 minutes.

Remove the sausages and simmer the gravy down on the stove until it coats the back of a spoon.

While the onions are cooking, boil the potatoes in a big stock pot. To do this, add a palmful of kosher salt to the water (yeah, that seems like a lot, but the water needs to be seasoned enough for the potatoes to absorb while cooking. Don’t worry, they won’t be too salty!), add the garlic, potatoes, and about a tablespoon of black pepper. If you don’t like potato skins in your mash, then peel them. I like the added flavor and texture, so I just scrub all the dirt off and go. Plus, I’m lazy and hate peeling potatoes, so there’s that.

You’re going to add just enough cold water to completely cover the potatoes and bring it to a boil. Then, reduce the heat to low and cook until you can easily poke with a fork. Don’t overcook them or the texture gets weird. Drain the water off the potatoes, and while they’re still hot, mash them.  Then add the butter and cream a couple tablespoons at a time, waiting for the butter to completely melt in before the next addition. By the time you get the whole stick of butter incorporated, potatoes should be creamy and fluffy. If not add a little more cream to get the right consistency. You don’t want soupy potatoes.  Add any additional salt and pepper to taste.

To finish, you can either plate individually, or if you’re serving family style, scoop mashed potatoes into a wide shallow bowl, top with sausages, a few onions, and a little gravy. Serve the rest of the gravy and onions on the side, so people can add more if they want. I just sprinkled the top with a bit of chopped curly-leaf parsley. Optional, but if you want to be impressive, go for it.

Notes: Traditionally, this dish is served with peas.  I prefer using the frozen variety. They taste fresher than canned. Just nuke them directly in their package according to the directions. Serve on the side sprinkled with a bit of salt and pepper, or add them to your plated masterpiece. You can also hide them in your mash for picky kids.

Don’t forget the bread! I just used a soft baguette brushed with butter, and sprinkled salt, pepper, and chopped parsley and broiled on high for like 3-5 minutes or until golden brown. Just don’t walk away from your oven! Burned bread is sad bread.  You’re going to want this to sop up the extra gravy. 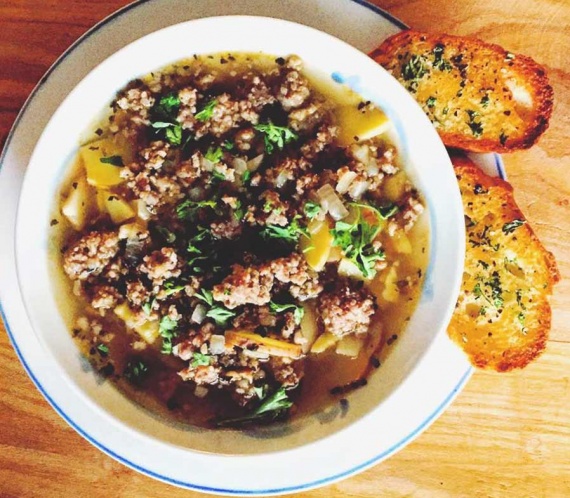